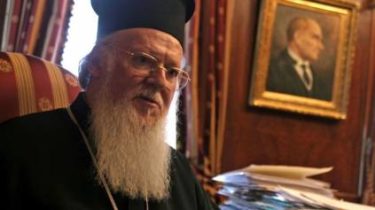 Solution can take to 1030 anniversary of the Baptism of Rus.

Ukraine will ask the Ecumenical Patriarch Bartholomew on the granting of autocephaly of the Ukrainian Church.

About it the President Petro Poroshenko said at a meeting with heads of parliamentary factions.

“Immediately after the Easter night on Bright Monday, I left for Constantinople (Istanbul). In addition to the social events that were very important and constructive with President Erdogan, with foreign Minister Cavusoglu had a meeting with His Holiness the Ecumenical Patriarch Bartholomew. Not only with him but with members of the Synod. We spent a total of 7 hours,” he said.

Poroshenko said that Ukraine is now closer than ever to having its own Autocephalous national Church. “I’m not ready to reveal all the details of this meeting, but there are key elements that will ensure this process. First, there is the treatment of the Church hierarchy. Immediately after returning I met. Today and tomorrow these meetings I have are about to get. After my meeting with Patriarch Filaret all the bishops of the UOC-KP was signed, showed them in the appeal to the Ecumenical Patriarch Thomas of the new Ukrainian Autocephalous Orthodox Church. Every one of them, ” added the President.

In addition, a meeting was held with the head of the UAOC Macarius. On Tuesday, April 17, it became known that the bishops of the UAOC signed an appeal to the Ecumenical Patriarch and the President. “In 26 years this is the first document that United all the churches,” he stated.

According to Petro Poroshenko, doors to other churches are also open.

“I wrote a formal appeal to the Ecumenical Patriarch to grant the Tomos of autocephaly of the Orthodox Church in Ukraine”, – said the head of state.

Appropriate treatment, as noted by Petro Poroshenko, also must approve the Verkhovna Rada of Ukraine. According to the President of Ukraine, a United Orthodox local Church will not become public. All believers will have the right to freely choose a specific Church and Church jurisdiction. In particular, if the desire to remain in the bosom of the Russian Orthodox Church, such right will be granted.