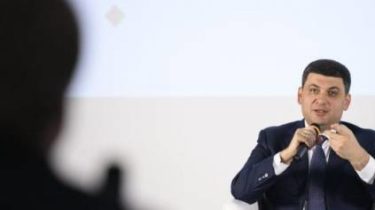 The Prime Minister said that Ukraine will not cope without a loan from the IMF and other organizations.

Prime Minister Vladimir Grosman believes that the main economic problem of Ukraine – the pressure of external debt, which amounted to more than 65 billion U.S. dollars. The head of the government assures that most of the debt was generated by predecessors in 2007-2014 years.

This Groisman said during a meeting with regional media representatives in Kyiv, reports UNIAN.

“The biggest problem from an economic point of view is the pressure on the state external debt, most of which was accumulated before 2014. In fact, from 2007 to 2010, the government took (in debt) to $ 26 billion. 26 billion dollars despite the fact that Ukraine does not become stronger. The government from 2010 to 2014 took over 20 billion. In fact, total debt today is 65-plus billion dollars that lie on the shoulders of the Ukrainians and the Ukrainian economy”, – said Groisman.

The Prime Minister noted that it was possible to reduce the ratio of debt to GDP, however, still need further loans from the IMF and other international financial institutions.

“In 2018, for the first quarter, the debt is the lowest in relation to GDP in 2011, is an important signal. But if will not run our programme of cooperation (the IMF), for example, the creation of an anti-corruption court or other parameters, then it will be difficult for these challenges to provide answers,” – said Groisman.

Meanwhile, the Finance Ministry says the reduction of government debt. 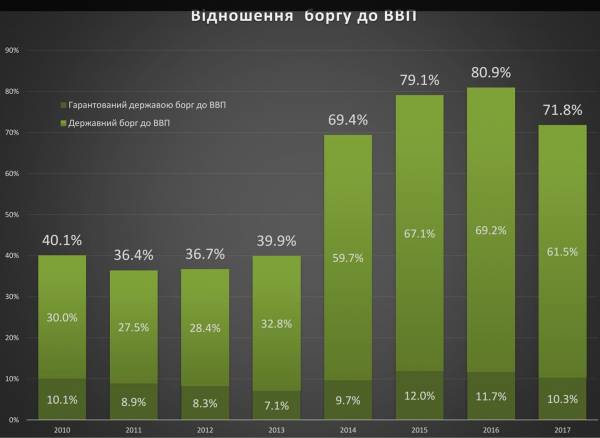