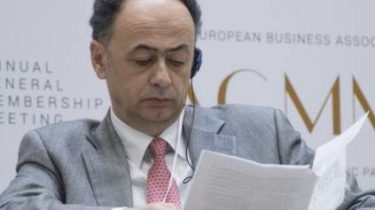 Kiev a few months needs to sign with the Brussels Memorandum, which will receive 1 billion Euro loan.

After signing the Agreement on Association of Ukraine with the European Union and the introduction of a free trade zone, Ukraine has increased exports to the EU by 30%.

UATV about this told EU Ambassador to Ukraine Hugues Mingarelli.

“Ukrainian exports to European markets grew by 30%. This is a significant figure. In addition, the free trade area promotes the integration of Ukrainian economy into the single market of the European Union. This means that Ukrainian companies will no longer be barriers to trade, exports or investments in this market,” said Mingarelli.

In the European Union once again confirmed their intention to provide macro-financial assistance (loan) in the amount of 1 billion euros.

“Now the European Parliament and the European Council consider this proposal, so we hope for a positive decision in the next few months. After that, the European Commission will be able to negotiate with the Ukrainian authorities on the conclusion of a Memorandum of understanding which will outline the conditions for granting macro-financial assistance,” said Mingarelli.

However, further development of relations with the EU, Ukraine needs to put more effort in combating corruption and the rule of law. One of the necessary first steps in the EU consider the creation of an anti-corruption court:

“Ukraine has made significant progress in the fight against corruption over the past four years. Legislation was passed, new institutions have been established. For example, the National Agency for combating corruption, the National anti-corruption Bureau (NAB), Specialized anti-corruption Prosecutor’s office (SAP). Thus, Ukraine has introduced new bodies to investigate corruption cases. It is also important to ensure the conviction of offenders, for this and need to implement anti-corruption court. It will deal with all cases from NABU and SAP”.

This body, according to Mingarelli, will be the missing link in the structure of the anti-corruption structure.

He also stressed that especially significant achievements in recent years is the reform of the state apparatus and judicial reform in Ukraine.