Unknown destroyed a dam on the Bortnychi aeration station in Kyiv 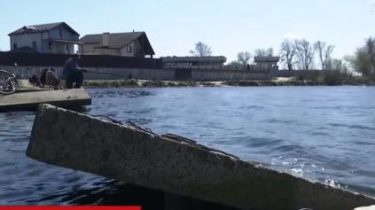 Unknown destroyed a dam on the Bortnychi aeration station in Kyiv

Local shake my head in the direction of luxury villas on the banks of the canal.

In the capital Osokorki unknown tried to disassemble the jumper Bortnychi aeration station, although a protective structure overlaps the direct leakage of treated sewage water into the Dnieper. Local fishermen nod in the direction of elite mansions, says the story TSN.19:30.

From the dam dropped eight concrete slabs. Thus the rich supposedly tried to make a passage for their boats. For fishermen there is no fun – the bad fish are biting because the water level fell. Plant workers say that the destruction of hydraulic structures will lead to the ingress of technical water in the Dnieper.

Unknown tried to sort the jumper bortnicheskoy WWTP. Protective structure overlaps the direct revolution of purified sewage water into the Dnieper. Local fishermen nod in the direction of elite estates. They say, the rich tried to make a passage for their boats. According to estimates Kyivvodocanal for the rebuilding of the dam need 500 thousand hryvnias. 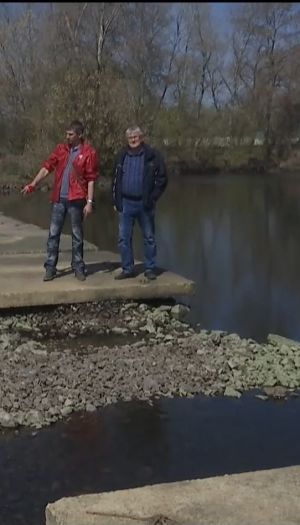 The station cleans the sewers of Kiev. After cleaning the water is directed through the channel in the Dnieper river, drains to river do not dump, and directed to the diffuser, where five huge pipes of different lengths of sewer water is evenly mixed with the river. If the dam is removed, the Dnieper just stink. “If you destroy, the water will be released into the Dnieper, it will not mix evenly, and the banks will always go to this water,” – said the head of the dispatch group Yuri Shelepov.

The quality of the Dnieper water in the dam environmentalists periodically exploring and constantly finding E. coli and almost the entire periodic table. Direct outflow concentrations of dangerous compounds will increase significantly. According to estimates of “Kyivvodocanal”, the restoration of the dam need 500 thousand hryvnias. Someone to take them is unknown, because the liability for damages will not be picked up. The police, the owners of the waterworks decided not to go, because I think that it is useless.