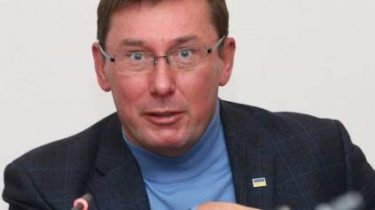 The NAB has already submitted the materials to the Prosecutor General.

To be signed by the General Prosecutor Yuriy Lutsenko are the documents from the NEB of the announcement of suspicion to one of the top officials of Ukraine.

“Currently on my Desk are the materials that I have to sign for suspected one of the top officials of the country,” – said Lutsenko during a visit to Brussels, reports “RBC-Ukraine”.

According to the public Prosecutor, “the legal service it is treated”. He also said that it is not detuct.

The law on the anti-corruption court did not consider due to lack of quorum.

Lutsenko also said that “we have 1700 sentences in the (corruption) cases. On the other hand people are not interested in it. They are interested in, when will the results counter the present regime of category A. And this is only the monopoly of NABOO. So I am in a rather delicate situation,” – said Lutsenko.

The attorney General said that the NAB is now about 120 cases in the courts, 40% of them were in General content with the GPU.

Meanwhile, the investigation at the “aquarium”, which is connected with the head of a Specialized anti-corruption prosecutors Nazar Holodnenkim. Can take a decision in two weeks.