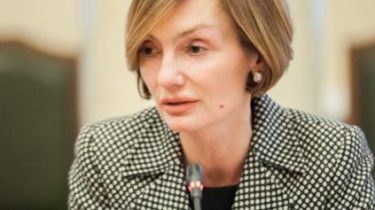 The suspension will act “until the resolution of the dispute on the merits.”

Darnitskiy district court of Kyiv has dismissed Deputy Chairman of the National Bank of Ukraine Kateryna Rozhkova and forbade her to participate in the meetings of the Board of the regulator.

About this Facebook said the people’s Deputy Igor Lutsenko, who filed a lawsuit in court.

“Today handed over to the NBU definition in my suit, which the court dismissed such a famous person as Ekaterina Rozhkova long-time assistant Gontareva. Together with the latter they made the decisions of the NBU in the interests of the banks in violation of anti-corruption legislation. And not just banks, and, judging by the recordings of telephone conversations Rozhkova Russian banks, in particular, the so-called Bank of Moscow (BM Bank) and Vneshtorgbank. As an MP, I have long sought the resignation of the current leadership of the national Bank, my addresses have been registered a number of criminal proceedings in respect of acts of the team Gontareva, the NBU. Despite the fact that the blow was gone, her closest ally Rozhkova left to cover up the corruption schemes that were started earlier,” – said Lutsenko.

The court decision stated that Rozhkov was removed from office “to resolve the dispute on the merits.”