The difference is 36 thousand dollars. Poltorak has denied the scandalous stuff magazine about the purchase of infantry fighting vehicles in Poland 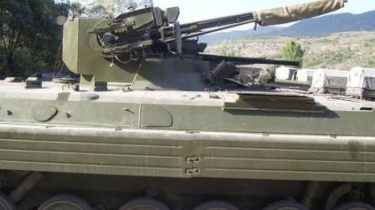 The difference is 36 thousand dollars. Poltorak has denied the scandalous stuff magazine about the purchase of infantry fighting vehicles in Poland

The defense Minister commented on the controversial purchase of military equipment.

The scandalous publication of the magazine “New time” the purchase of BMP-1 in Poland is not true.

This was stated by Minister of defense Stepan Poltorak, in an interview with BBC News Ukraine.

“The published information is not true, because the defense Ministry has procured combat vehicles for 169 thousand dollars. The information I read in a magazine – it was about 205 thousand. Sometimes the desire to fight corruption leads to unpredictable consequences. Every person, no matter who he is – a journalist or law enforcement – before you publish the information, should be careful to check it. Especially if it is associated with the defense of our country”, – he stressed.

According to Poltorak, Russia puts pressure on Ukraine’s partners to not sell weapons and equipment.

“We find it very hard to work with partners, because Russian influence is very serious. In any contact, when we try to agree on the supply of arms through a variety of formats, Russia is affected. In this sense, this publication is not exactly benefited the APU and the defense of our country… If there were fewer scandals, as with the BMP, it would be more countries that want to help us…”, he added.

The Minister also said that now Ukraine buys through “Ukroboronprom”, but considering that the defense Ministry could buy directly.

“In my opinion, this is absolutely the right decision. Because during foreign travel there are proposals for the procurement of weapons and equipment. If the transition to direct contracts – it will be much more efficient and cheaper. At the same time, when no such offers, we can refer to the special envoys, including from “Ukroboronprom”. They are having widespread network that can quickly find us the weapons, equipment, ammunition. That is, should act in such and such an option” – said the head of the defense Ministry.

Separately Poltorak noted that the time of transition to the new combat vehicles will be long as resources are limited.

“Our ability to repair or creation of new infantry fighting vehicles today is limited. So this is a decent and necessary. BMP purchased completely efficient, good equipment, can actively carry out combat missions. Feedback from commanders is very positive,” he concluded.

Earlier, the Polish company Wtorplast decided to sue the magazine “New times” and the author of the scandalous material about corruption schemes on the purchase of the BMP, which also featured the people’s Deputy Sergey Pashinsky.

In turn, the chief editor of the Ukrainian edition of “New Time” Vitaly Sych said the pressure from the people’s Deputy Sergey Pashinsky and Vice-Chairman of the national security Council Oleg Gladkovsky. According to Owl, the pressure is due to published in the journal investigation, the persons involved which are Pashinsky and Gladkovsky.