The G7 Ministers said in which direction Ukraine should continue reforms 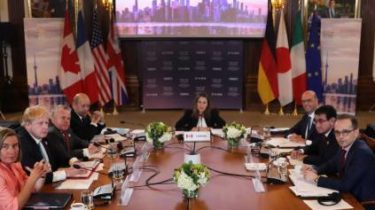 The G7 Ministers said in which direction Ukraine should continue reforms

Also, the foreign Minister said the reform of Ukraine in the sphere of decentralization and economic growth.

Member States of the “Big seven” urged Ukraine to create anti-corruption court on the recommendations of the Venice Commission.

This is stated in the joint communiqué of the countries.

The foreign Ministers of G7 countries stressed the steps that have been made Ukraine, especially in the areas of decentralization and economic growth. They urged the government of Ukraine to continue the progress towards reforms. “This includes the creation of an anti-corruption court in accordance with the recommendations of the Venice Commission”, – said in a communique.

In addition, the foreign Minister urged the Ukrainian government to progress in reforms of the electoral law and the adoption of the law on national security.

We will remind, for the first time Ukraine participated in the events of “the Big Seven”. April 22 in Toronto, Canada held a special meeting on the situation in Ukraine. It was attended by the Minister of foreign Affairs Pavlo Klimkin.