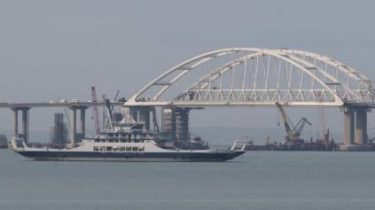 The construction of a bridge across the Kerch Strait. Archival photo © Reuters

Additionally plan to carefully record the visits of ships into the closed ports of the Crimea and Sevastopol.

The Ministry of infrastructure of Ukraine initiates the prohibition for Russian ships to pass through rcah Ukraine. This was announced by Deputy Minister Yuriy Lavrenyuk during the meeting regarding calls at the closed ports of the Crimea and Sevastopol, as well as sanctions activities related to the construction of a bridge across the Kerch Strait.

“This is unacceptable, when during the aggression by the Russian Federation on Ukrainian rivers, where the critical national infrastructure, go the Russian court. We will initiate a ban of the progress of Russian ships along the rivers of Ukraine”, – said Lavrenyuk

Also Lavrenyuk said that the Ministry of infrastructure handed over to the Ministry of foreign Affairs materials the sanctions list of ships that docked at the ports of the Peninsula, despite the ban, to further enclose to the international claim. Control of such vessels are also going to strengthen.

“We need to tighten measures to detect unauthorized calls at the closed ports of the Crimea and accountability. The Ministry of infrastructure will conduct a review of intruders on the country flags and shipowners, with the subsequent adoption of measures against such violators,” – said the Deputy Minister.

Earlier, the Minister of infrastructure Vladimir Omelian said that companies building for the occupation authorities Kerch bridge to Crimea, will be included in the sanctions list, which will provide Ukraine and its allies.