S&P raised the credit rating of “Ukrzaliznytsi”. What this means 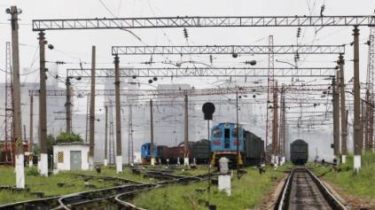 S&P raised the credit rating of “Ukrzaliznytsi”. What this means

The company hopes to attract cheap borrowing for modernization.

“Systemic reform of the company on all fronts and more informed decisions contributed to the fact that our financial stability noticed by the world rating agencies. The first reacted to S&P, by appointing us to the level of CCC +. The value of the company’s exit from default,” – said the acting Chairman of the Board of “Ukrainian Railways” Evgeny Kravtsov.

The rating upgrade opens up the possibility of cheaper borrowing.

S&P noted that the rating upgrade contributed to the completion of the “Ukrzaliznytsya” restructuring of a significant proportion of debt, the company has made exceptions to the conditions of circulation of Eurobonds for $ 500 million with a maturity up to 2021 clauses cross default on outstanding obligations 3.9 billion (153 million dollars) in front of the local Bank.

S&P also affirmed the rating of these Eurobonds of “Ukrzaliznytsia” on the level “CCC”.

Recall, “Ukrzaliznytsya” in may 2013, placed a debut bond issue of half a billion dollars with a maturity of five years.

Eurobonds of “Ukrzaliznytsia” together with securities of “Oschadbank” and “Ukreximbank” was included in the perimeter of the restructuring of external sovereign and government-guaranteed debt initiated by the Ministry of Finance of Ukraine after approving a new four-year IMF eff EFF for Ukraine 17.5 billion dollars.