Threatening Kiev: a largest city of the country is dangerous to move people with visual impairments 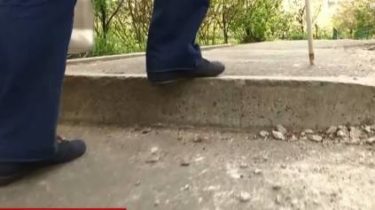 Threatening Kiev: a largest city of the country is dangerous to move people with visual impairments

Odessa is much more attention paid to the blind, than the capital.

Kiev for people with visual impairments is full of obstacles and threats of city where sidewalks meet in the middle of the pillars, and the sound of traffic lights is almost there. Even in institutions for the blind there is no tactile paths that would help to move on their own, according to a story TSN.19:30.

Every time Victoria goes out of his apartment, starts the test. The woman does not see from birth, her eyes is stick. Without it not one step, because on the way to the bus stop a lot of obstacles – curbs, parked cars, poles, ditches and fences. Victoria need to get with Troyeshchyna to the city centre for classes in the circle Amateur. On the trolley with a voice message the route number, she responds with enthusiasm, because such are very rare. However, to sit at the right trolley is not easy, because the passengers do not notice it, the door now closed, and through the high ramp, the woman has repeatedly clung and fell. “This is the smallest trolley, and sometimes three steps,” she says.

The pillars in the middle of sidewalks and the lack of a sound traffic lights – Kiev for the visually impaired is a continuous obstacles and threats. Even schools for them no tactile paths, which would have helped to move independently. To lay a special tile near the library officials promise 7 years. 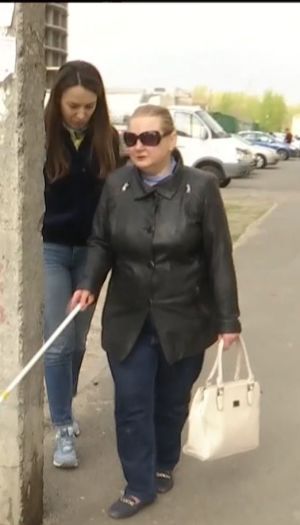 If the names of the stops are not announced, Victoria has to be considered. With two transfers she gets on Pecherskiy Spusk, where every day arrive hundreds of people with damage to vision. The nearby Central library and computer centre for the blind, SLD and production. But even here, they wander among the machines. “Here’s where to go, where to go, here’s the track, and there is always a machine stand, and I knock, so comes the owner and starts shouting,” say these people. Pave from the metro station “Klovska” to society for the blind tactile-guided path, they are asking for seven years – it will help to move on their own, without an adult, but now on their way to the restaurant and parked the car. “We had no money, but last year had the tools, so they instead track sent new asphalt and made the handrails,” – said the Deputy head of the management Association of the blind Michael Novoselki.

A tactile ribbed carpet is a special tile, which enable the blind to navigate in space. The whole huge Kiev there are only a few. One of them is located near the crossroads of Vladimir and Large Zhytomyr, but people with visual impairments don’t go there and complain that you lay a track, not where. More accessible for them was the Odessa – there are tactile paths began to lay two years ago, the tile was ordered from abroad, and now they have each institution for the blind, and even at regular intersections, and plans to build them near hospitals and hostels.

While in Odessa, make, in Kiev, the officials further promise. Meanwhile, all the ordinary people of Kiev seems a trifle, for the visually impaired – threat to life. “For us billboards is death, for in his face to cut. I personally broke a leg, just a foot fell into an open manhole,” admitted one of the capital’s residents with visual impairments. Sound lights, a special Zebra, the announcement of stops in public transport – all this would greatly facilitate the lives of blind, which the capital has more than $ 4 million, but the city for them and is still available.