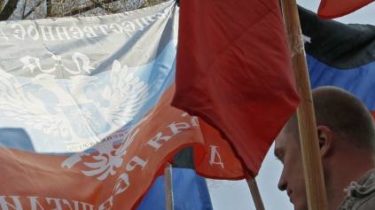 As a result of enemy fire, three Ukrainian servicemen were injured.

For the past days in zone anti-terrorist operation fighters of illegal armed formations so-called “L/DNR” made 53 attacks on the strongholds of Armed forces of Ukraine. As a result of enemy fire, three Ukrainian servicemen were injured.

“In particular, in Donetsk area, prohibited 120 mm and 82 mm mortars, grenade launchers, heavy machine guns and small arms fired at the occupants of the defenders of the Water. Also a 120-mm mortars, the enemy used in the area of Lebedinsky. In addition, rocket-propelled grenades, heavy machine guns and small arms, the enemy repeatedly fired at our positions near the Mine Butovka, Nevel, Gotovogo, Marinka, Wheatears and Sand, from APCS and anti-tank missile system under Talakovka, rocket-propelled grenades near the Town of Bogdanovka, heavy machine guns – in the area of Survey, Verhneuralskogo, Shirokino, Pavlopol and Pischevik, from small arms – Oborona Avdeevka, Krasnogorovka, Talakivka and Shirokino and near Marinka – were sniper fire” – stated in the message the press center of staff ATO.

It is noted that at the Lugansk direction of the 120 and 82 mm mortars, grenade launchers, APCS, heavy machine guns, the separatists fired on Ukrainian positions under the Crimean. Also 120 mm mortar, infantry fighting vehicles and rocket launchers the aggressor has used our strong points near Svetlodarsk.

As a result of enemy fire, three Ukrainian servicemen were injured. Injured defenders promptly delivered to hospitals and given medical assistance.