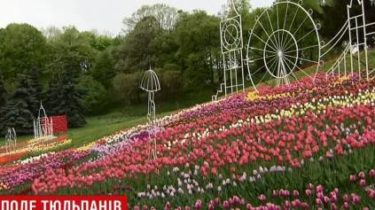 The exhibition will last a month.

On the Singing field in Kiev opened a major exhibition of tulips. Called her “Around the world”, because by using colors, the organizers tried to recreate the atmosphere of a dozen countries, according to a story TSN.19:30.

With 250 thousand tulips were established parts of the UK, Italy, India, China and other countries. Representatives of “Kievzelenstroy” each of the districts of Kiev was dismantled around the country. Not yet blossomed Brazil, has already opened the first buds of Kiev, and riotous color sparkles in Sydney. Over all this worked for two hundred people. “Flowers were planted in October last year that they have undergone a full cycle of freezing and are now able to bloom and delight all visitors”, – the organizers say.

Royal “Garden of Europe” with thousands of tulips opens near Amsterdam

Valentina and Tatiana came from Rzhyshchiv, they left for the day their gardens with tulips to see here, and especially befitted a Venetian composition. “A lot of work to grow”, – they admit. Blossom exhibition under the open sky will be another month.

The exhibition is called “Around the world”, because by using colors, the organizers tried to recreate the atmosphere of a dozen countries. 250 thousand different tulips had been brought from Ukraine and from abroad. Over all there were two hundred people.