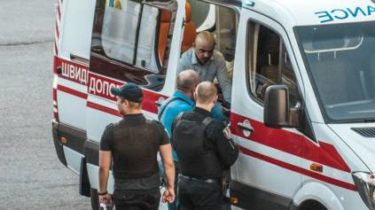 According to the man, Mustafa Nayem several times lost consciousness during the beating.

The people’s Deputy of the Verkhovna Rada Mustafa Nayem after the beating in the center of Kiev on 30 April began back pain and was diagnosed with a concussion.

About this on his page in Facebook said his brother Masi Nye.

“Mustafa concussion. Began back pain. The operation was, administered painkillers”, – he wrote.

There was a video of the beginning of the conflict, which beat the people’s Deputy Nayem

According to Masi Nayem, his brother along with a lawyer until five in the morning testified to the police.

He also urged witnesses of the incident and the owners of the establishments on the street Skoropadskiy to provide information and video surveillance.

“Need any videos, witnesses of the incident. Who have friends in the Arena, who owns restaurants maybe, DVRs and more – this is very important, please give me a contact. Need any video of the incident. Especially those cameras that street Skoropadsky (arena city side of Leo Tolstoy), where he continued the fight and has suffered more beatings, when Mustafa tried to stop the children before police arrived,” wrote the brother of the Deputy.

Friends, need any video of the incident. Especially those cameras that street Skoropadsky (arena city…

In addition, the comment to the edition “Gordon” Masi Nayyem said that his brother during the beating several times lost consciousness.

“Mustafa feels bad. Mustafa passed the tests for alcohol – it has 0.0 ppm. He repeatedly lost consciousness during a fight – kicked. A concussion and a broken jaw confirmed. Now continue the survey. Doctors are not made final conclusions. How long he will stay in the hospital is unknown,” he said.