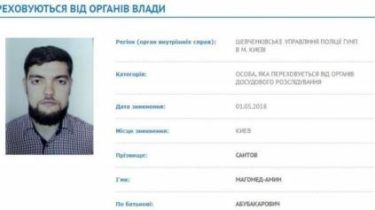 Its data posted on the website of the Ministry of internal Affairs in the list of persons who disappear from authorities.

One of the participants of the conflict, which caused injuries to the people’s Deputy Moustapha nayem and disappeared from the scene, maybe Mohammed Amin Saitov. He was declared wanted.

Its data posted on the website of the Ministry of internal Affairs in the list of persons who disappear from authorities.

Mohammed Amin Saitov is one of the founders of the promotion company “Boombox Promoushns”. Two others – his brother Musa Saitov and Donetsk Mohammed, who is also the assistant head of the NGO “Diaspora of the Chechen people” and Director of the BoomBox Promotions.

The company was registered in Kiev on the street Degtyarevskaya, 27-T, and some of the others also associated with Sitovym. At this location is business center Mikom Palace, it also hosts the all-Ukrainian public organization “the Diaspora of the Chechen people” under the leadership of Daniel Goncharov.

Gerashchenko told what will happen to a fugitive who attacked Nayem

We will remind, the conflict occurred around 17:30 Monday, April 30, near the Bessarabsky market in downtown Kiev. Hire moved by the car in the direction of Bessarabska square. On the road it cut “Mercedes”, began to quarrel. At this moment they drove the BMW car. During the conflict one of the strangers punched the Deputy in the jaw. Criminals from a scene have disappeared. To search for car law enforcement officers entered the plan “Interception”. The three were detained. The man who hit MP Nayem, still looking. Nayem was taken by ambulance to the hospital.

The video shows how MP was surrounded by five men and began to push and punch him in the face. The conflict occurs on the road. Two cars block the way to the car Nayem. It is known that one of the participants of beating have fled abroad, the three were detained. Two of them were citizens of Russia. 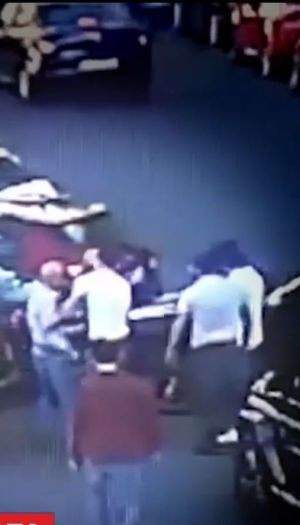