The soldiers say that the war remains a war you do not call her.

Despite the official announcement of the completion of the ATO , the war in the Donbas continues. Immediately after the start of Operations of the combined forces wounded three Ukrainian soldiers, according to a story TSN.19:30.

Under Gorlovka in broad daylight on Tuesday shot enemy snipers, and they were hiding in the yards of civilians, where to meet Ukrainian military do not have permission. Civilian fighters use for digging trenches and as human shields. “They often hide behind civilians, when their positions work Utes, and the rear 300 metres away is a herd of cows, a local herder. They know that the answer will not do, because there is peace,” say the Ukrainian soldiers.

Videoroliki shelled Ukrainian positions near Gorlovka of the residential yards

In the suburbs of Gorlovka were harvested, the average positions of the militants: they use a civilian for digging and as human shields. The land around the Ukrainian positions in deep craters: militants fired from heavy guns, waiting for a duel, and then the drone was looking for our technique. 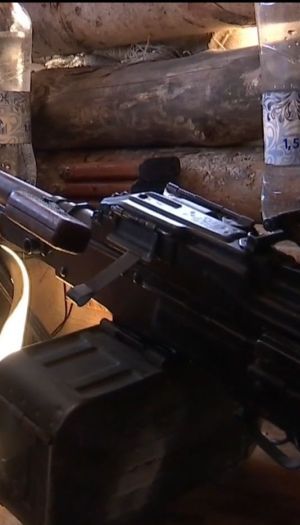 The land around the Ukrainian positions in deep craters, because the militants fired heavy guns, waiting for a duel, and then with a drone looking for our technique. Heavy caliber is not used for several days, but intensified by snipers. The military recognizes that by changing the name the war has not ceased to be a war – on the frontline, nothing has changed. “I don’t know if something change or not. Now while so. There then we’ll see, or will change, or remain the same. Well, I think it would be necessary to recapture their territory, because this is our land,” says the fighter with a call sign “Bald”.

About it, whose is the land, boys reminded by installing a Ukrainian flag under the noses of the enemy. Fighters know and feel the breath in the back of the Mat – Ukrainians already on the outskirts of Gorlovka.