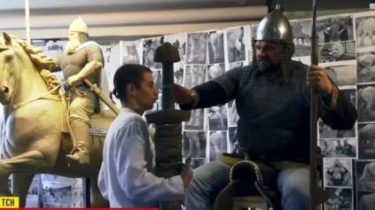 Several days continued violent disputes around the idea of a monument to Ilya Muromets, a draft of which was uploaded in a social network the mayor of the city Vitali Klitschko. Four-meter bronze knights must install this year in the Park of “Friendship of peoples”, and posed for the monument of the famous Ukrainian strongman Vasyl Virastyuk, says the story TSN.19:30.

With the help of two men Virastyuk wore metal armor, which weighs less than 10 pounds. Due was and a sword, which can raise only two of the usual body of men. However, the enthusiasm of the mayor, who posted online a video of the preparation of the monument, users are not divided – a monument they call the bad taste and vasnetsovskoe. The main complaint of critics – to the beard Ilya Muromets. “He shave that terrible beard, princely warriors did not wear. How you can be a prisoner of the Soviet archetypes? Does the capital have no sane historians?”, indignant users of social networks.

The head of the capital Vitali Klitschko posted the project on his page in the social network. Four-meter bronze knights must install this year in the Kiev Park “Friendship of peoples”. Posed for the monument to Vasyl Virastyuk. And while the Internet is arguing about the beard Muromets, the scientists say about its appropriateness in the capital. 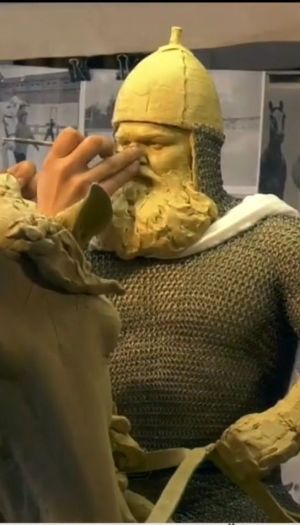 The author of the monument regrets that his work appreciated by people who do not understand what you say. Vladimir Zhuravel argues that before starting to work on the monument, shoveled dozens of books and found out that beard in the required day in Kiev still wore. For the historian and ethnographer Sergei Segedy Ilya Muromets – a very real historical character. Many years ago, Szeged, together with other scientists participated in studies of the remains, which are now in the Kiev caves Lavra, and from what I have seen so far impressed. “Then it is time a lot was said about what the monks have falsified these remains. And I thought and even said aloud: if falsified, it is very professionally”, – he said.

In Kiev, a Museum of monumental propaganda

A scientist argues that rising Ilya Muromets was 177 centimeters, and for its era it was a lot. The man was handsome, broad-shouldered, very strong, but with pathological changes in the bones that testify to a whole bunch of diseases that could tie him to a bed for many years. He died, as befits a warrior, in battle, as evidenced by chopped wounds on the chest and arm. View heroes on 85% helps to recreate the anthropological reconstruction, but the hair and beard is always the least certain part of this portrait.

On the grave of Bohdan Stupka strange monument

That Murom actually lived in the town of Moravské near Chernigov, and was very real Ukrainian hero, Szeged, no doubt, like that monument in Kiev is quite appropriate. But the archaeologist Alexander Simonenko believes otherwise. “Who told you that he lived here? This is the same legendary personality like Baba Yaga, Koschei the deathless, and all that! There were no heroes! There was no Eli Muromtsev” – he insists. According to this researcher, Muromets invented to ideologically bind Kiev to Moscow, and a monument to him in Ukraine are misplaced, regardless of, with a beard to portray, or without. “No archaeologist can not tell you, was beard in the times of Kievan Rus or there was beard,” said he.