Lyashko called “false” suspicions of fictitious sale of his car 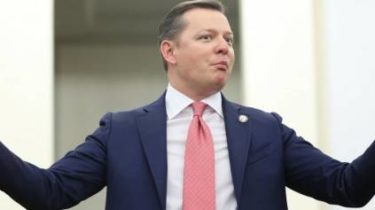 Lyashko called “false” suspicions of fictitious sale of his car

The leader of the radical believes that want to discredit him before the presidential election.

The leader of Radical party Oleg Lyashko called “false” information that he could fake to sell his car.

“NABOO, fulfilling a political order from the known to the Embassy, spreads false information about what I allegedly fictitiously sold my car. It is nonsense! I have my car sold in 2015, since that time, I have no and I do not use the money from the sale I declare,” wrote the leader of the radicals on his page in Facebook on Friday evening.

Lyashko believes that the new case against him by anti-corruption authorities is an attempt to discredit him ahead of presidential elections.

Radical party leader demands from NABOO “not to engage in fraud, and the real fight against corruption in the government.”

Recall, the National anti-corruption Bureau of Ukraine suspects the leader of the Radical party, Oleg Lyashko in the forgery of documents for the sale of a car, in which he received more than 2.2 million. This is stated in the conclusions of the Obolonskiy district court of Kyiv on April 18.

In the decisions of 3 may appeared to be shared in the Unified registry of court decisions, States: in return for the 2015 the MP pointed out that re-registered the car MERCEDES-BENZ S 500L 4MATIC on the candidate from “Radical party” at the extraordinary elections 2014 Veronica V and consequently received an income from the alienation of movable property in the amount of 2 245 500 UAH.

TSN contacted Veronica, who confessed – were shocked when she was contacted by investigators NABOO and reported such transactions. She States that nothing Lyashko did not buy and did not sign. In addition, a woman does not understand how he got sometime in the lists of “Radical party” (her name in the lists appeared under number 140 – ed.). Says that never agreed to their participation in political parties.

The Deputy kiyevo-Svyatoshinsky district Council, who ran for the deputies of the Verkhovna Rada in 2014 from the Radical party, Oleksandr Yurakov said that he is the ex-husband of Veronica eel. On the page in the social network Yurakov wrote that he bought a car and gave it to Veronica. Why the Declaration Lyashko appears that not he but the wife, not explained.

Yet the main accused of the radical of a case of forgery of documents. More precisely, detectives believe that three years ago Oleg V. falsified the signature of a woman who allegedly bought an old Mercedes for two million two hundred thousand. The woman gave evidence and said that “Mercedes” Lyashko and agreement first heard from NABOO.