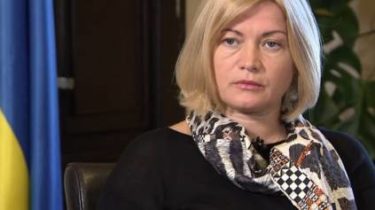 Russia still has not provided a response regarding the exchange of Ukrainian political prisoners at its 23rd citizens.

The militants demand the release of more than 80 criminals, and in return ready to release 15 hostages-Ukrainians, who were detained in the occupied Donbass. In those eight decades and includes 23 citizens of Russia, concerning the exchange which in Ukrainian political prisoners Moscow still has not responded.

About this in Facebook said the first Deputy Chairman of the Verkhovna Rada Iryna Gerashchenko.

“Today, the humanitarian group in Minsk Ukrainian side was represented by experts from Minot and SBU, I was with colleagues for remote communication. As I have been informed by colleagues at the end of the meeting was, unfortunately, unsuccessful. We have not heard a response from representatives of the Russian Federation on the proposal to give them 23 Russians convicted for crimes before the Ukrainian government for the liberation of Ukrainians-political prisoners of the Kremlin. The Russians are in his position: “We are not there”. But representatives ORDO, fully controlled by Russia, include the Russians in the lists of “militia”, demand from the Ukrainian side to immediately release the Berkut officers, terrorists, Russians, demand to give them more than 80 criminals and say that they will give us no more than 15 of our citizens. This is unacceptable,” – said Gerashchenko.

She said that “the Ukrainian side also made a correct and a compromise proposal for the liberation of Ukrainians in IDLO, and if there was a desire on the other hand, the next phase of the release would occur very quickly, we are ready for it”.

One of the problems is the lack of information about many of the hostages.

“They just kept in prisons and not give us any evidence of their content. There is no progress in the search for the missing, the Russians flatly refuse to establish a mechanism with the International Committee of the red cross to search for missing (the wording of the bounce: “We’re not there”). Also inconclusive were the talks about the opening of the KPVV “gold”, blocked by militants”, – said Gerashchenko.