The nationalists led militants captured Lusvardi at SBU, he was taken by the investigators 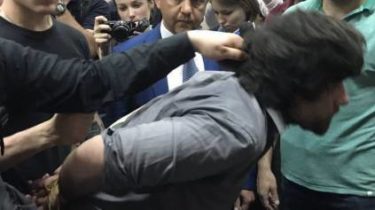 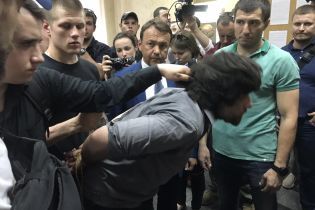 The nationalists led militants captured Lusvardi at SBU, he was taken by the investigators

The detained nationalists near the Embassy of Brazil Thriller “LDNR” Raphael of Lusvardi led to the management of SBU in Kiev.

This was announced on his page in Facebook the head of the nationalist organization-14 Eugene Karas, which is an online broadcast from the event.

After that, the activists began to demand that to them there came outside the representative office.

Subsequently, Karas said that for a fighter coming investigative team.

“Investigators are going to pick up Lusvardi” he said.

Caught Lousberg assassin-a mercenary with a LNB which was released by the SBU.

“Promise to hold investigations to find out what he was doing in Kiev”, – he explained.

Recall, Brazilian mercenary “DNR” and “LNR” Raphael of Lusvardi received 13 years of imprisonment with confiscation of property. In court the defendant admitted his guilt and said he regretted it. Evidence in court has led to numerous public videos posted on YouTube, which Lusvardi in the ranks of the militants Donbass talks about his “exploits”.

In particular, the Brazilian mercenary of the terrorist organizations “DNR/LNR” Rafael Marquez of Lusvardi – a supporter of Stalinism and Nazism, Russian Eurasianism – was detained on arrival by plane at the airport “Borispol” from Brazil 6 October 2016. “In the fall of 2014, the 32-year-old professional killer arrived on the temporarily occupied territory of Ukraine and joined the band of “Viking”. Took part in the fighting in the area of Verhulivka, day, Gorlovka, Starobeshevo, Debaltsevo, Donetsk airport,” – said the SBU after the arrest.

In accordance with the court’s decision from August of last year, the verdict on the conclusion of Lusvardi for 13 years was cancelled because of the number of violations. Thus the Brazilian a year after being sentenced to 13 years in prison received full freedom of movement in Ukraine and lived in the Holy protection goloseyevsky monastery, pondering to become a monk.