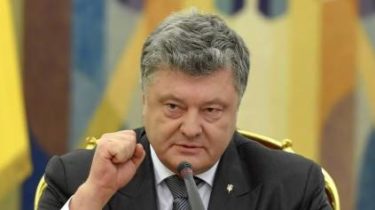 The President assured that the law enforcement officers to react immediately to such actions.

The President of Ukraine Petro Poroshenko has condemned manifestations of intolerance and anti-Semitism during rallies nationalists in Odessa and Lviv.

“I consider inadmissible the attempts to drag these shameful phenomena in Ukraine – as recently took place during the rallies in Lviv and Odessa. Ukraine is no place for discrimination and intolerance on the grounds, because respect for life and the dignity of each person is the highest value for the Ukrainian state”, – he stressed.

According to Poroshenko, the Ukrainian government will react strongly to any attempt to sow discord in our society.

“The reaction of Ukrainian law enforcement agencies on such illegal actions will be instantaneous,” – assured the head of state.

PP: I strongly condemn any manifestation of intolerance and anti-Semitism. Consider unacceptable the attempts to drag these shameful…

Published by Petro Poroshenko on may 4, 2018

We will remind, scandal with xenophobic flavor erupted in Odessa in the end of the Patriotic course on may 2, when the center of the city were several hundred supporters of the “National body”, the “Right sector” and the party “Freedom”.

The head of a local cell “Right sector” Tatiana Zaikinoj the microphone was given to the Cathedral square. She in her speech at the rally, said: “Ukraine belongs to Ukrainians, not Jews, not oligarchy. Glory To Ukraine!”. This performance was broadcast on social networks, it has garnered thousands of views and hundreds of comments. “There is a weird semi-literate girl, and the crowd of adult men it listens to and applauds,” the surprised nick.