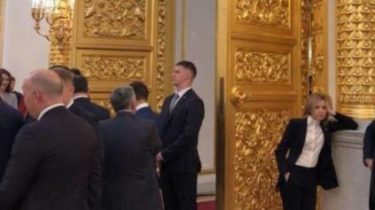 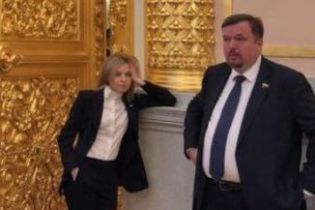 Poklonskaya at the inauguration of Putin © Alexei Navalny on Twitter

Photo from sad ex-“solicitor” were scattered in the Network.

Social media users laugh for a photo with the illegitimate state Duma Deputy Natalya Poklonskaya, which frankly bored for the next inauguration of the President of Russian Federation Vladimir Putin.

The photo got “nyash-myash”, which in the Grand hall of the Kremlin stood alone, leaning against the wall. Look at Polonskaya was, to put it mildly, aloof.

Nick began to remember the attitude of the Deputy illegitimate Tsar Nicholas II and joke that she didn’t wait for it. Also wrote the comic versions of what might think about Poklonskaya.

God, what a beautiful picture. New mamasita you the tape. Best of comments: – not a real King… – Natasha on your first ball

Here Pini ascend to the throne for the fourth time. Poklonskaya th-that was so sad.

Natasha can’t wait for the coming of the king: pic.twitter.com/zxdS2vV9cl

Poklonskaya: “Fly. The fly on the ceiling… How is she holding up?” pic.twitter.com/g8BKmHfX97

Best photos from the inauguration will be gone. “She waited for Nicholas II, but it did not work” pic.twitter.com/JIYmspNAXM

When you want to have a drink, and dad still wasn’t said pic.twitter.com/rNl2vc7sjI

As previously reported, recently, social media users discussed the words of the former”Prosecutor” of the Crimea illegitimate and the Deputy of the state Duma Natalia Polonskaya, which is attributed to the commander Alexander Suvorov quote from the works of Alexander Griboyedov “Woe from wit”.

During a radio Poklonskaya wanted to show off his mind and tried to quote the phrase “to serve would be happy fawn sick”. She messed up a few words, so leading it was corrected. After this, Russian Deputy said that quote belongs to Suvorov.