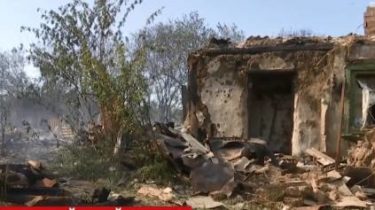 The men believe that he survived by some miracle.

Russian artillery struck at zaytsevo in broad daylight, when nobody expected it. A miracle in the village none of the locals did not die and was not injured, according to a story TSN.19:30.

“Here behind me is one arrival on the road for two more arrivals. Bombed 122-mi shells. There were two civilians, we with you dragged and hid”, – told about the fire a soldier of the battalion “Donbass-Ukraine” with the call sign “Smile”. Residents Zaitsev headlong ran into the cellars. “It is impossible. If there were about a dozen,” says the district resident is the most distant from the front part of the village of Constantine.

Night, the invaders struck with heavy weapons on Zaitsev. The last few weeks in the village, divided in half war, continuously echoes of heavy breaks. A miracle in the village none of the locals died or was wounded. The commander of the APU unit, nicknamed “Aver” spent “tour” places of fall of enemy shells. “Somewhere around 20 went here. Here we see a 152 calibre, a dug-out – that is, it buries itself in the ground and it explodes”, – he explained. Intelligence reported that the shot cannon artillery – howitzers.

Militants fired Zaitsev: one person was injured, the house lit up

Soon on the same site again became restless in the military have heard the movement of heavy machinery on the opposite from the boundary line of the territory, and prepared anti-tank grenade launchers. The soldiers were waiting for command: “Fire!”. However, the goal never came, and the team, accordingly, has not sounded. But military anti-aircraft guns shot down an enemy drone.