During attacks of Loskutovo Zaytsevy and wounded a woman – OOS 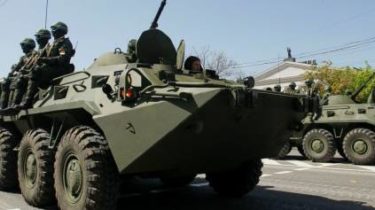 During attacks of Loskutovo Zaytsevy and wounded a woman – OOS

In both localities destroyed houses

On the eve of may 9, the invaders fired Loskutivka and the end of September, bringing the injured woman, who worked in the garden.

This is stated in the message on the official page of the operation joint forces in Facebook.

“To provocations on the eve of 9 may, the enemy also fired from heavy artillery locality Loskutivka located far from the contact line, and continued shelling Zaitsev where a woman was wounded in 1943 year of birth, which worked at that time in the garden. In both of the settlements, destroyed houses, ” – said in the message.

We will remind, today during a briefing the press Secretary of the Ministry of defense of Ukraine Maxim Prout reported that from the North in the morning, with militants occupying administrations of the Russian Federation has recorded 11 impact of attacks. In the morning the occupants were shelling of 82-mm mortars on the defenders of the Town. Also during this night recorded provocative attacks from different types of grenade launchers, heavy machine guns and small arms, in particular, in the side of the defenders of human settlements: Water, Shirokino, Pavlopol, sand, Food, Hnutove and the defenders of the mine Butovka.