May 9, in Kiev: activists fight began 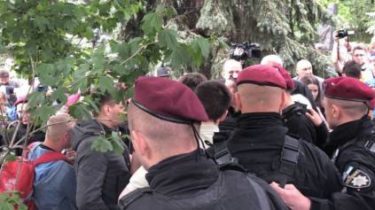 May 9, in Kiev: activists fight began

During mass events dedicated to the Day of Victory over Nazism in Kiev between activists started the fight.

So, during the organization of the living corridor to deputies from “Opposition bloc” Nestor Shufrich and Vadim Novinsky in the crowd started the fight. After a few minutes it ended, because it interfered with law enforcement.

In Kiev staged a March to 9 May

In Kiev held a propaganda campaign “Immortal regiment”. The police through mass actions have passed to the strengthened mode of service and do not rule out provocations. The ribbon and the use of Communist symbols is prohibited. Follow the page @TSN Live, in order not to miss relevant and interesting under

In General, the shares in the capital take place peacefully. From time to time parties propaganda “Immortal regiment” shouting anti-Ukrainian slogans, and “Fascism will not pass”, “Bandera – out of Kyiv”, UNIAN reports.