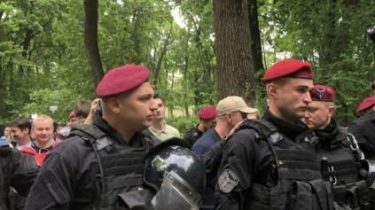 The man who attacked, detained

In clashes during the commemoration of 9 may in Kiev injuries received man, in 1954.

This is reported in the press center of the Kyiv police.

“The young man who hit the victim was taken to the police Department. After conducting a first test of his actions will give a legal assessment”, – appears in the message.

Recall that during the organization of the living corridor near the Eternal flame in the Park of Eternal glory to deputies from “Opposition bloc” Nestor Shufrich and Vadim Novinsky in the crowd, a fight broke out. After a few minutes it ended, because it interfered with law enforcement.