On the Luhansk region detained “MP “LC”, who voted for the “Constitution” of militants 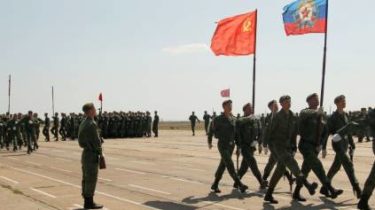 On the Luhansk region detained “MP “LC”, who voted for the “Constitution” of militants

The suspect chose a measure of restraint.

In Luhansk region the police detained a “Deputy” so-called “people’s Council “LNR”, which at the time supported the vote illegal “Constitution” of the gang.

It is reported by the regional Prosecutor’s office.

It is noted that in the same year he committed the wrongful acts, “aimed at the illegal change of borders of the territory of Ukraine, the occupation of part of the Luhansk region and the functioning of the quasi-governmental education, “LPR”, in particular, voted for the “law” that militants had established on the territory controlled by “the military situation”.

Separatists declared suspicion, and later the court elected the measure of restraint in the form of two months of detention.

We will remind, the scandalous Russian singers Oleg Gazmanov, Victoria Tsyganova, one of the founders of the group “Agatha Christie” Vadim Samoilov and Alexander Marshall (real name Alexander Minkov – approx.ed.) made on 9 may in the occupied Lugansk.