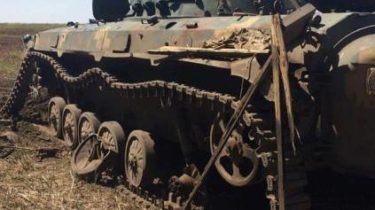 For the past day, the mercenaries more than 40 times fired at positions of the Ukrainian military.

In the last days, may 14, the situation in the area of operations of the combined forces remained difficult. The intensity of the fighting on the contact line has decreased.

“Russian occupation troops 42 times violated the ceasefire, 11 of them used the Minsk agreements prohibited mortars. Our troops were active in the defense and gave an adequate response to the enemy”, – stated in summary as of 7:00 may 15.

According to the headquarters, in the Luhansk region, near the village of Troitskoe, Novozvanivka, gold the enemy was harassing fire, trying to provoke a Ukrainian military response. In the direction of Donetsk active hostilities lasted in the areas of the settlements of Iron, Novgorod, mine Butovka.

“The efforts of the Russian occupation troops were in vain. Defensive positions of the Ukrainian forces remained unchanged,” – said the press center.

Separately it is reported that over the past day from the combined forces of the dead and wounded.

But the loss of the enemy, as told by the scouts, was 1 killed and 3 wounded.

“For the current day, may 15, there were 7 cases of opening fire by the occupants from small arms at our positions in order to provoke return fire”, – summed up in the headquarters.

Recall that in the weekend in the Donbass died Ukrainian medic, pulling out from-under fire of the wounded. The man received a shrapnel wound to the head.