Kobzon, Gazmanov and violent refused to open the Crimean bridge for military aircraft 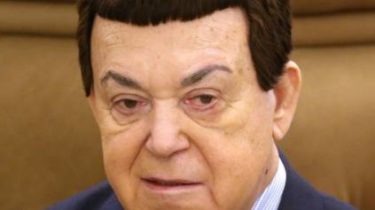 Kobzon, Gazmanov and violent refused to open the Crimean bridge for military aircraft

The singers complained about the poor organization of the event.

The scandalous Russian singer Iosif Kobzon, who is a folk artist, self-proclaimed “LDNR” will not take part in the opening of the so-called Crimean bridge, is scheduled for may 15.

This he personally told the TV channel “360”.

“No, that’s not true (with respect to information that he allegedly is in the Russian-occupied Crimea – approx.ed.). They were able to organize a normal way, not a military transport plane… Let the youth go to open the Crimean bridge”, – said Kobzon, complaining that he wanted to be there, but has no such possibility because the proposed route.

According to the singer, for the same reasons refused to go to Crimea odious Lev Leshchenko, Alexander Buinov and Oleg Gazmanov.

We will note, earlier on the website of Joseph Kobzon in the “timetables” section it was stated that on may 15 he will take part in the opening of the Crimean bridge.

We will remind, today in Kerch, on may 15, going to spend the festive opening of the Crimean bridge. The length of the bridge across the Kerch Strait connecting the annexed Peninsula and Krasnodar Krai of the Russian Federation, is 19 kilometers.