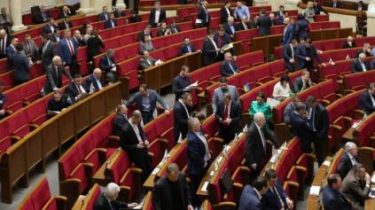 In the anti-corruption organizations believe that the procedure of identification of the owner will extend for six months.

The Verkhovna Rada adopted the law, which you can use to buy up Ukrainian companies, hiding the information about the final beneficiary.

This is stated in the message of the Center of counteraction of corruption.

Act No. 6141, entitled “On amendments to some legislative acts of Ukraine concerning the encouragement of foreign investment” incognito gives you the ability to buy Ukrainian bonds and securities, privatizing the property.

“If the Ukrainian banks are required to precisely identify the ultimate beneficiary, with the entry into force of this law they will have to deal with nominal owners, for example, the Cypriot Bank. Information about real owner will only permit a foreign Bank to represent the interests of “offshore investor”, – stated in the message.

It is noted that for complete owner information, law enforcement agencies, including the NEB, the EPS and the Prosecutor General’s office will be required to send an official request about the final beneficiary. The identification procedure may take up to six months.

This will open up opportunities for corrupt Ukrainian and Russian businessmen to privatize companies in Ukraine, say in the organization.

“To buy the Ukrainian securities, or state-owned enterprises, corrupt officials and the Russians now it will be enough to hire Cyprus lawyer, who will open the account, for example, in an Austrian Bank and Austrian Bank will buy in Ukraine securities on behalf of the offshore company”, – says the Executive Director of the CPC Daria kaleniuk.

Parliament strengthened the protection of copyright

The law, according to the Center for combating corruption, violates the tenth recommendation of the International standards on combating money laundering and financing of terrorism and proliferation of weapons of mass destruction”, which refers to the need for “determining the beneficial owner and taking appropriate measures to verify his identity so that the financial institution was convinced that it knows who the beneficial owner”.

Recall, the Verkhovna Rada of Ukraine on may 15 passed a bill which provides for the creation of a “nominee” who has the right to provide services for the registration of securities, which should greatly simplify attraction of foreign investments in Ukrainian government bonds.