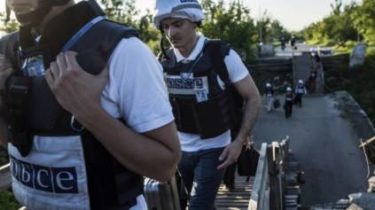 The situation occurred near the Donetsk filtering station.

On Tuesday, may 15, fighters of an illegal armed formation “DNR” in the Donbass fired on a patrol of the Special monitoring mission of the OSCE.

This was reported by representatives of the OSCE and the UN.

“This Tuesday SMM patrol near Donetsk filtering station was shelled from the South-East, where the position of the Russian armed forces”, – is spoken in the message.

This Tuesday, SMM patrol near Donetsk filtering station was shelled from the South-South-East, where the position of Rus. armed groups. We condemn another case of intimidation SMM Rus. fighters and call on Russia to immediately stop the unacceptable behavior

In this regard, the OSCE member States from the Ukraine called soldiers of the Russian Federation to stop the unacceptable behaviour and not to resort to intimidation of members of the special monitoring mission.

We will remind, earlier the Deputy Chairman of the Donetsk regional state administration Eugene Vilensky called on the OSCE to set clock control in the Donetsk filter station in connection with regular attacks.