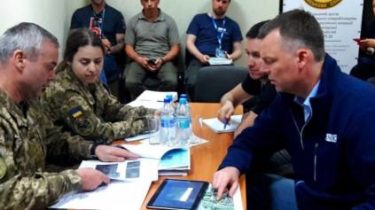 During the meeting he also presented evidence of the use of militants of the banned weapons.

In the evening, may 17, the Operations chief of the combined forces Sergey New held an unscheduled meeting with Deputy Chairman of the SMM OSCE in Ukraine Alexander Hug, during which he provided photo evidence of application by fighters of BM-21 “Grad” near Avdeevkaand urged him to influence them to stop firing at the territory controlled by Ukraine.

“During the meeting, Lieutenant General New called authoritative diplomat Alexander hug impact on the Russian occupation troops and illegal they have created military forces to stop firing at government-controlled Ukrainian territory, particularly with the use of the Minsk agreements prohibited weapons,” – said in the message.

It is noted that the head of the HSE told the BBC that since the beginning of may, the militants “L/DNR” 930 carried out attacks on the Ukrainian positions in the Donbas. He also drew attention to the shelling of the school in Svetlodarsk 17 may, when there were 380 students and 45 staff members.

Two more were injured. About two o’clock the occupants opened fire on the village. Shot from guns of large caliber. 15 artillery shells exploded in residential neighborhoods. Now rescuers check if there are any people in the destroyed houses.