Ukrainians for the first time in history raised cryptocurrency of Everest 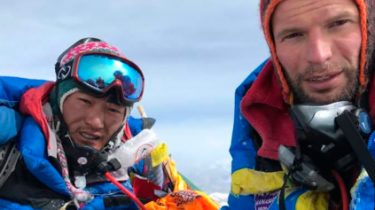 Ukrainians for the first time in history raised cryptocurrency of Everest

Tokens on top of the world is a future that has already arrived, but not all are able to notice it.

14 may, Ukrainian expedition to Everest and Lhotse in the composition of the Late Taras, Roman Gorodeckogo and Dmitry Semerenko climbed Everest.

Today Taras Later, the head of the club of tourists Couloir, the leader of the expedition and cryptoanalysis, reported what happened on top of the world:

Together with ASK.fm we formed another important mission: to raise the tokens ASKfm above all in the world. Tokens on top of the world – this future has already arrived, but not all are able to notice it.

I’m interested in the stock market, primarily because of tools and possibilities that offer us the technology of the blockchain. I especially liked the idea of decentralization and cryptoanalysis – getting rid of the bureaucracy that surrounds us in everyday life. I am convinced that not everyone knows what are the applications of the blockchain, except for payments in the Internet and I hope, after our expedition, people will start being interested in this technology and realize that cryptocurrency has a lot more than just a tool for speculation.

Network ASKfm 2.0, as in other cryptocurrencies, for the translation will be used not familiar to us money, dollars, hryvnia or Euro and local currency – ASKfm tokens – ASKT. Due to the token cryptocurrency ecosystem gains absolute independence from the government, local legislation and any other regulatory bodies.

People go to the mountains because they are there!

And challenges exist to be overcome. I think that ASKfm brave enough to turn the social network on the blockchain ecosystem and thus change the market of cryptocurrency that exists now. I am pleased to work with a company who is not afraid to set myself difficult challenges in which you can lose everything or be on top of the world.

In the night from 13th to 14th of may we raised two cryptocurrency wallet Ledger with 1000000 ASKT tokens equivalent to 100 000 $ to the height of 8848м. We have people who were holding the highest tokens in the world.

One of the wallets Ledger on which 500 000 ASKT, who had been on the summit of Everest, will be awarded at the return of the expedition.

Details of the draw will be available on the website https://askfm.io/ profile of the project.