Chrezvychainyi awarded a 15-year-old boy, who rescued from a burning house dozens of people 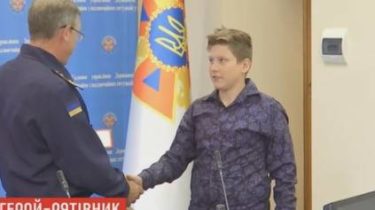 Chrezvychainyi awarded a 15-year-old boy, who rescued from a burning house dozens of people

Himself hero Andrew does not consider

Mom chewed him out for not timely returned home from school, but it later turned out, he stayed, because he saved people from fire in high-rise buildings, says TSN.16.45.

“But it could be so different if it were not for one 15-year-old Andrew Burtovoy, who saved at least a dozen people,” – said the rescuers.

Mother of Andrew Alla recalls – it was a normal day. She was waiting for the son from school, he was delayed. Said just helped to fire. What had really happened, she told the neighbors the next day. And the son and still not too talkative.

“I went around the house and saw a lot of black smoke. I walked up, and there are already small called “fire”, and here they walked, photographed, held it, smiled and called: “Come here fire, come, see together,” says the young man.

He ran to the entrance. Were burning on the fifth floor, but the second was a lot of smoke. Began to knock and call at every door. The fourth was the most difficult – smoky, hard to breathe, and live mainly pensioners, who have long come to the door.

Videoscaling brought out a burning house a dozen residents

My mom scolded Andrew for what just did not return home from school. It later turned out that he was delayed because he was saving people. This is the story of 15-year-old schoolboy Andrew Burtovoy, who led from the burning house at least a dozen residents. 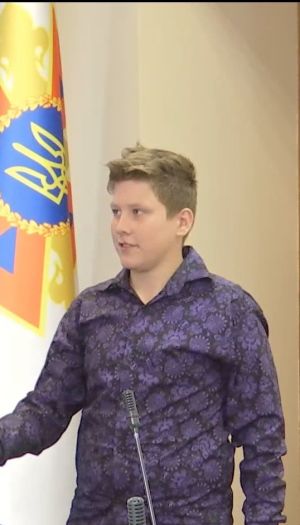 “I know that this boy took care of me. Thank you! The people should be men, then we will have strong and Ukraine”, – said one of the rescued women.

Warning residents of the fourth floor, Andrew rushed for a fifth. Here still all black from soot. The owner of the apartment where the fire occurred, says that on that day at seven in the morning, went to work. Called him at five in the evening. Until I reached home, the house remained nothing but ashes.

“All burned. Walked from the balcony into the corridor, on the hood, in the kitchen, all the Windows burst. What stand, then left,” says the owner of the apartment Sasha.

Andrew had to evacuate all tenants before the arrival of firefighters. This allowed to save time, the fire is completely liquidated in less than an hour.

Himself a hero, Andrew did not believe. But branded t-shirt, given to him by his rescuers, said, put it on the last bell at school.

Andrew says that mom is now trying to persuade him to become a lifeguard. Already learned what documents are needed to enroll in school, where learning fire. Andrew himself remains true to his dream – to be a marketer.

“Brought and brought. It happens. I’m not the only one, there are many,” says the young man.