“Buk”, which in the Donbas shot down the plane MH17, was in service with the Armed forces of Russia – the result 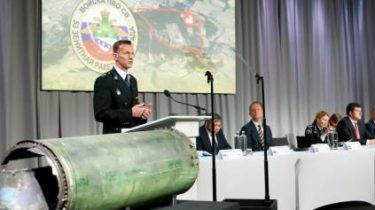 “Buk”, which in the Donbas shot down the plane MH17, was in service with the Armed forces of Russia – the result

In the crash killed 298 people.

The Buk on July 17, 2014 was shot down over the Donbass Malaysian airlines flight MH17 and on Board of which killed 298 people, was made in Russia and was in service with the Armed forces of the Russian Federation.

It has established a joint investigation group (SSG), investigating the crash, said the first Deputy Prosecutor General of Ukraine Dmitry Storozhuk. In the Netherlands, today announced the results of the investigation.

“Today was a significant event in this investigation, because a joint investigation team has officially stated that “Buk”, which is July 17, 2014 was shot down a passenger plane Malaysia Airlines, were not just produced in Russia, as stated earlier. This self-propelled fire installation at the time of the shooting, which killed 298 people, was in service with the Armed forces of the Russian Federation. Namely, belonged to the 53rd anti-aircraft missile brigade from Kursk. That is, this weapon was not purchased by the separatists in the px, it was not purchased and delivered to the point of shooting any other mythical way. National chief Prosecutor of the Netherlands Mr. Westerbeke has stated clearly that the weapons of the Russian Federation, which was delivered to the territory of Ukraine, was fired on the passenger plane Malaysia airlines. This is not just a statement that evidence collected in accordance with all the necessary procedural requirements to be submitted to the court,” said Storozhuk.

The investigation has taken another important conclusion.

“Quoting Mr. Westerbeke is: “is dubious whether the SSG to build on the data of the Russian authorities on this issue”. That is, information concerning the use of Russian by the power of arms of the Russian Armed forces on the territory of Ukraine, which she refused to provide formal joint investigation team in accordance with Resolution 2166 of the UN Security Council, but actively promotes, through its media, is now officially named as doubtful. I think this is quite a serious signal to the media who will continue to rely on the statements of Russia on this issue and replicate messages with similar content,” said Storozhuk.

First Deputy Prosecutor General believes that from now on, any manipulation regarding the possible guilt of the Ukrainian side should be terminated.

“You have to understand that the evidence of guilt of the Russian government much more, but there are specifics of the investigation, therefore, much of this evidence will be submitted to the court without publication,” – said Storozhuk.

We will remind, on July 17, 2014 the plane Boeing 777 company Malaysia Airlinesflying from Amsterdam to Kuala Lumpur, according to investigators, was shot down over separatist-controlled area in Donetsk region. All 298 people who were on Board the plane were killed.

October 13, 2015 the Commission of the security Council of the Netherlands, which was engaged in investigation of causes of accident of the liner, issued a report in which it was said that the plane was shot down by a missile of class “air – ground” fired from a Buk missile system brought from Russia.

Later investigation revealed that “Boeing” was shot down by a missile 9M38 series used in anti-aircraft missile complex “Buk”. The plant was delivered from Russia and launched from the territory, which was then controlled by the separatists. Fragments of the rocket series of “Buk” was discovered as the autopsy of the bodies of the crew members, and in one of the window openings of the cockpit.

The international investigation team managed to identify most of the route that the Buk missile system was sent to the territory of Ukraine, as well as the route of its movement in the opposite direction. According to investigators, the complex was moved from Russia into Eastern Ukraine and later deported back to Russia on a white truck Volvo.