In a market where beat a military pensioner, staged pogroms 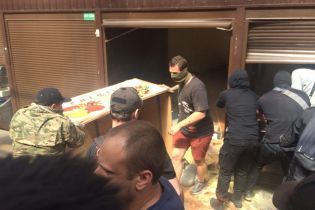 In a market where beat a military pensioner, staged pogroms

Today, may 27, at the market near the metro station “Forest” staged pogroms. Thugs with covered faces pogroms trays and scuffled with police, reports “Gromadske”.

Share in the market “Lesnoy” after the beating of the military retiree was announced by the organization C14. However, they dissociated themselves from participating in aggressive actions. I assure you that going to the market one hour later and with a peaceful message, only to reason with the guards, who admitted beating and to check whether the point attacked an elderly man.

Participants C14 smashed the stalls in the market, “Lesnoy”, beat the pensioner. There were clashes with the police pic.twitter.com/iZFyt8ofqe

hromadske.ua published a lie. Please attention to “the Ukrainian truth”, which has published false information…

In Kiev, in the market near the metro station “Forest” , the seller beat a military pensioner, who stood up for the woman. The seller was 24-the summer citizen of Georgia.