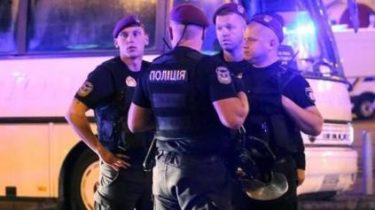 This is considerably less than last year at Eurovision.

About this informed the head of the Metropolitan police Andrey Krishchenko.

70 posts 24 are brought in the Unified register of pre-judicial investigations. Four events relate to the mining of stadiums, metro stations and shopping centers. Of the remaining 20 most of this is petty theft, document loss, vandalism and fraud.

In Kiev Russian and an accomplice robbed a fan from Spain

Krishchenko noted that during the “Eurovision”, which took place last year in Kiev, there were 12 incidents of a criminal nature against foreigners. But the number of foreign visitors were much less.

On Saturday there were some local conflicts, but the police intervened and they were discontinued. In addition, two people were injured when they fell from the trees when watching a football match.

As for the 18 people who were arrested for trying to provoke a fight near NSK “Olympic”, then, according to Krishchenko, they were all released. The police found their personal data and led with them preventive discussion.