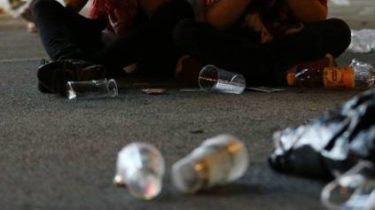 Kiev was frightened by how much garbage was left behind by fans.

Utilities Kiev resulted in the order of the fan zone, where the night before and rested at night , football fans.

Frivolous behavior of fans, which left behind piles of garbage that angered Kiev. And most of all upset Kiev clogged fountain in Shevchenko Park, where he was area fans of “Liverpool”.

That their God has ordered our fleet so dirtied.

This morning no trace of fan festivities are left. In the Park again, purely:

So, enough to post yesterday’s garbage. Specifically went in the morning in Shevchenko Park. Already all cleaned (thanks to utilities),…

Congratulations to the winners of the Champions League and thanks to those who I was worried about the cleanliness of the hemline while working in the fan zone….

The head of national police Sergey Knyazev has informed that to 14 hours most of the fans have already to fly out of Kiev. In General, the police reports about fairly quiet throughout the match.