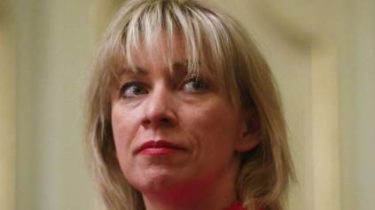 The representative of the Russian foreign Ministry Maria Zakharova © Reuters

A special operation with a re-enactment of the murder of Russian opposition journalist Arkady Babchenko has a “propaganda effect”.

Wrote about this on his page in Facebook, the representative of the Russian foreign Ministry Maria Zakharova.

“What Babchenko live – the best news. Always be so”, – she wrote.

“Can’t wait”. Babchenko told about details of the RAID on his “murder”

At the same time, Zakharova regretted that “in other cases, masquerade will not work”.

“That story was founded propaganda effect is obvious,” – concluded the representative of the Russian depodesta.

What Babchenko live – the best news. Always be so. Unfortunately, in other cases, the masquerade failed. The fact that the story was laid propagandistskie effect, obviously.

Published by Maria Zakharova 30 may 2018

We will remind, in the evening of 29 may in Kiev, shoot the Russian journalist Arkady Babchenko. The police called his wife. From the received wounds in the back, pre – the lungs and heart, the man allegedly died in the ambulance.

The Metropolitan police have put forward two previous versions of the “murder” of the journalist – his professional activity and civil position. The people’s Deputy Anton Gerashchenko said that the killer waited Babchenko on the landing of his house, and when the journalist opened the door of his apartment, he fired several shots in the back. Was also released the composite sketch of the suspect in the “murder” Babchenko.

During the briefing the head of the SBU Vasily Gritsak journalist Arkady Babchenko came to the audience – he’s alive, and faked his death in order to apprehend criminals. “40 thousand dollars – I’m good,” said Babchenko in his speech. Watch more videos and read details on the website: https://tsn.ua/ukrayina/zhurnalist-arkadiy-babchenko-zhiviy-1163613.html Video channel 5