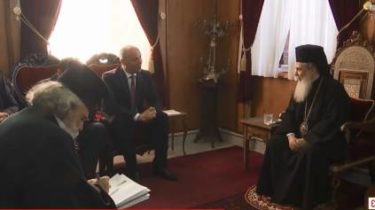 It is possible that after them independent of the canonical Church in Ukraine was a step closer.

Speaker of the Verkhovna Rada of Ukraine Andriy Parubiy visited Jerusalem and met with Patriarch of the local Orthodox Church. The topic of conversation was the prospects of granting the Ukrainian Orthodox canonical autocephaly, according to a story TSN.19:30.

The delegation of Ukrainian officials arrived by motorcade to the Jaffa gate and went on foot to the old part of the city where the Patriarchate is located. Parubiy could not hide the excitement before the meeting. “For us the unity of all Orthodox Christians is the most important issue on the agenda”, – he said. Patriarch Theophilos received the guest, but noticed that the door of politics and religion is difficult. “We understand that politics are often intertwined with religious issues and this is a very critical problem,” he said.

These negotiations Parubiy was preparing for at least a month. He came to the Holy land to enlist the support of the Patriarch Theophilus in the question of autocephaly for the UPTS. All talks on Ukraine took place behind closed doors. Contrary to Protocol, after the meeting the journalists are again invited into the room. To all who came to Jerusalem, the Patriarch made gifts. 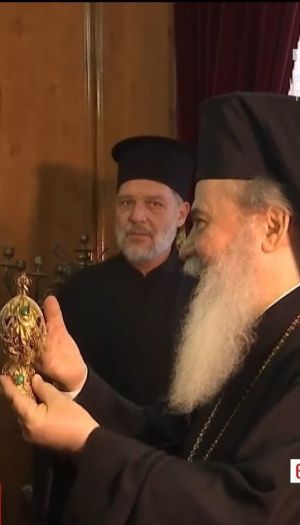 In front of an audience, the Patriarch and the speaker of BP exchanged a few remarks – the bulk of the negotiations took place hidden from prying eyes. Instead of the planned 20 minutes, the meeting lasted over one and a half hours. Contrary to Protocol, after the meeting of the journalists invited into the room, and the Patriarch presented the guests from Ukraine gifts. And after souvenir in response, Easter eggs, smiled genuinely and said, “we Need to break the egg to the birth of a new life.”

Analysts have not yet commented on the negotiations in Jerusalem, but note that the situation with the possibility of granting Ukraine the canonical autocephaly of the Church develops in a favorable manner. This was made possible thanks to the demarche of the Russian Orthodox Church during the historic Cathedral on the island of Crete in 2016. There at the insistence of Patriarch Kirill of Moscow erased from documents questions about the new rules of granting of autocephaly, even though the Orthodox were willing to agree that such decision may be taken only with the consent of all churches with the Moscow Patriarchate, inclusive. But then the ROC refused to participate in the Cathedral, and the issue remained pending.

“It was the most fatal mistake of the Moscow Church, because that rejecting the agreed position that the granting of autocephaly can only be carried out subject to the consent of all churches, it is the only model on which you can grant autocephaly, left the old one. That is the model on which the Church of Constantinople can act alone,” – said the priest and the theologian Cyril Hovorun. He argues that Tomos about the Ukrainian Church is already written, and its text has worked the best Greek scholars.

There is also a clear plan for further action: after the Declaration of the Tomos of the Church, attest to willingness to cooperate (currently, the UOC-KP, UAOC and at least 10 bishops of the UOC-MP) will meet at the founding of the Cathedral. They can approve the establishment of an Autonomous and independent Church, and then to elect the Primate, who is recognized in the Orthodox world. “The new administrative structure of the Church – it will obviously be established by a decision of all churches that exist in Ukraine. Everyone – I mean everyone, including the Moscow Patriarchate, at least part of this Church. I think that now in the interests of maximum MP to join this process,” – said Archimandrite Cyril.