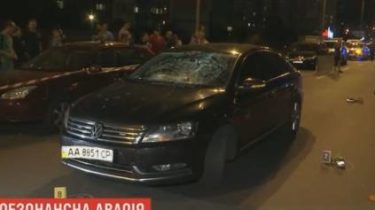 Police says that the machine was not part of the tuple.

A police car last night on a pedestrian crossing knocked down 13-year-old boy on a Bicycle. Witnesses say the car raced ahead of the official motorcade. The accident occurred in one of the residential districts of the capital. The child was hospitalized in serious condition. For his life doctors struggled all night, says TSN.12.00.

“Called and said that the child was hit by a car,” recalls the boy’s father.

Alexander Drobilko all spent the night near the hospital. He’s exhausted and can barely hold back emotions. It was his 13-year-old son collected the car. For the life of Sasha to fight the doctors of the Moscow children’s hospital “OKHMATDYT”.

“The condition of the child heavy, but stably. Surgery. The child is in intensive care,” – says the doctor.

Most doctors ‘ attention is now focused on the head injury – surgery it needs, however, the situation may change at any time.

“Skull fracture, but he does not yet require surgery. There is a hemorrhage, unfortunately,” adds the doctor.

It all happened the night before. Sasha with a Bicycle in a crosswalk was hit by a car.

The footage of the first minutes after the accident, witnesses removed, as Volkswagen was traveling along with several cars. They, I assume, was a tuple, because moving with a siren and flashing lights. The speed was more than 100 kilometers per hour. The child was thrown several metres.

The driver of the car stopped a few black car that was driving behind, toured the scene of the accident and moved away. The evening witnesses suggested that the presidential motorcade. This morning, deny this information.

“I was assured that this car has nothing to tuple”, – assured the representative of the President of Ukraine for children’s rights Mykola Kuleba.

The police are not on camera and all told, Volkswagen did not belong to the tuple. On the website misleading, the police carried out a special mission. According to TSN employee name is Andrew Banichuk and it works really in a battalion of maintenance of the police of Kiev. Besides him in the car was the passenger. Them both on the spot check on the state of intoxication, blood alcohol was found.