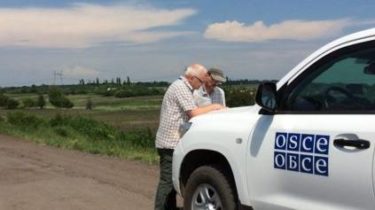 According to observers, the drone produced 20 shots.

The militants near the occupied village Krinichanskiy in the Luhansk region fired at the drone of the OSCE observers.

This is stated in the Mission report of the special OSCE monitoring in Ukraine (SMM) on June 1, on the basis of information received 19:30, may 31, 2018.

“The footage from the mini-UAV SMM, which flew on 30 may over the area near the village Krinichansky (Krasnogvardeysky, controlled by non-state government, 42 km to the West from Lugansk) found the presence of three men dressed in military style, in particular one of them was armed and fired at SMM UAV,” – said in the message.

As noted, observers who were on West from Klinicheskogo, heard 20 shots from small arms in the area where the drone flew, and according to them, the fire was in the direction of the UAV.

We will remind, during the day, 1 June, militants armed gangs “DNR” and “LNR” in the Donbass 33 times shelled strongholds of the Ukrainian troops.