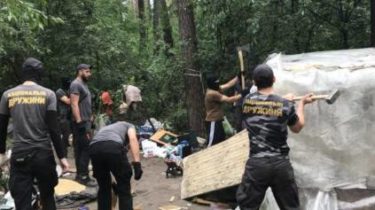 They have axes and hammers, dismantled the improvised dwellings of the Roma people.

Representatives of the National teams dismantled a Roma camp in Goloseevsky Park of Kiev.

This is stated in the press service of the organization.

“Today, the National squad cleared the Park of Kiev from the Gypsy filth. We will not allow you to turn your city into a brothel, where there is unsanitary conditions, and stray animals eat for dinner. It is sufficient to ignore our laws and Rob our citizens and pollute our cities”, – stated in the message.

How is Saturday in the Park goloseyevsky? Today, the National Squad cleared the Park of Kiev from the Gypsy filth. We…

Published by the National Squad on 7 June 2018.

We will remind, earlier it was reported that Roma in Goloseevsky Park of an ultimatum given daythat they left the place of residence in the camp.