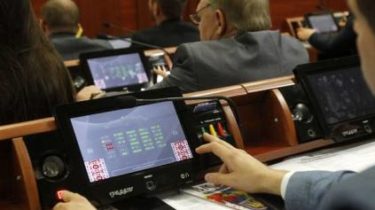 Not a single issue on the agenda and have not decided.

City Council deputies did not support the creation of a Museum on the archaeological excavations at the Postal square in the second reading.

It is reported Delo.ua.

As noted, the “for” vote of 56 MPs out of 120. Most controversial were the issues of who will report to the Museum, as well as the conditions of the termination of the investment contract with the developer of the shopping center.

Thus, the Chairman of the Commission of culture of the Victoria Mucha said that the city may not terminate the investment agreement because it violates its terms. In addition, she noted the need to strengthen the area of the excavation, otherwise they will be dangerous for people. In turn, the Deputy Gusovsky called those who will vote for amendments to Victoria Flies, infidels.

In the end, any issue on the agenda and was not accepted. Due to the lack of result, the situation escalated and turned into a scandal and a fight. People began to tear the posters, and later representatives of Nestrugina blocked the exit from the city Council, reports 44.ua.

We will remind, the city Council in the first reading adopted the draft decision, which the Postal square is a shopping center will create a Museum of history of Kiev. The Mall was built on the archaeological site of Kievan Rus. They found unique artifacts IX-XIII centuries, namely, the estate and the street.