“What are you yapping at?” MPs fought in Parliament because the statement Murewa 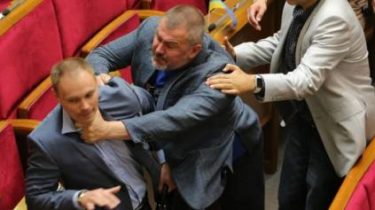 “What are you yapping at?” MPs fought in Parliament because the statement Murewa

Birch ran up to Dolzhenkova with his fists.

Friday, 8 June at the meeting of the Verkhovna Rada there was a fight between the people’s Deputy Sergei Dolzhenkova of “Poblocka” and Yuri Birch of the popular front.

The fight occurred after the first Deputy speaker of the Parliament Irina Gerashchenko criticized the extra fractional people’s Deputy Evgeniy murayev for the words in relation to political prisoner Oleg Sentsov.

Previously, Moore was named Director of the terrorist.

Gerashchenko noted that Murewa in Parliament led Opposition bloc. Dolzhenkov began to answer, that Moore is not a member of the “opposition bloc” and he was not elected on the party list.

After this Birch ran up to Dolzhenkova with the words “What are you barking?”, pushed him and grabbed the collar of his jacket. The deputies, who were nearby, pushed Birch.

We will remind, on June 7, the television broadcast Moore called illegally detained in Russia after a terrorist.