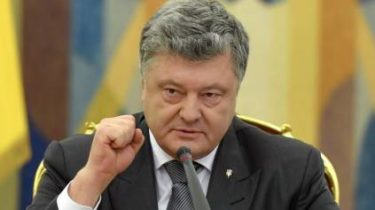 The President also briefed Lyudmila Denisov, the results of the meeting with the families of Ukrainian prisoners of the Kremlin.

President Petro Poroshenko instructed the Ombudsman Lyudmila Denisova in the near future to visit the Ukrainian political prisoners kept in Russia and the occupied Crimea and Donbas.

This was discussed during the meeting Poroshenko and Denisova on Saturday, June 9, the press service of the President.

“Fouls” Russia: the European Parliament has prepared an interactive map, where instead of stadiums prisons with political prisoners

“To do this, the President set a task the Ministry of foreign Affairs to assist the Ombudsman in its work on the territory of the Russian Federation”, – stated in the message.

Poroshenko also told Denisov on the results of the meetings with the families of Ukrainian prisoners of the Kremlin on Friday.

Earlier on Saturday, the press service of the President reported on a telephone conversation Poroshenko and Russian President Vladimir Putin, during which it was agreed that in the near future, commissioners for human rights of the two countries will visit the citizens prisoners.