The European Parliament called on Poroshenko, the government and deputies to go to the Kievprayd 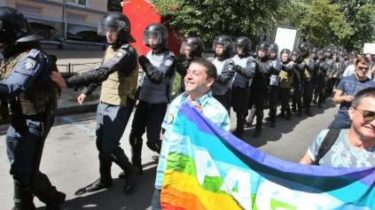 The European Parliament called on Poroshenko, the government and deputies to go to the Kievprayd

The equality March will take place on 17 June.

MEPs urged the Ukrainian authorities to enter Kauppi – equality March in support of the LGBT community – which will be held in the Ukrainian capital on June 17.

This is stated in an open letter addressed to the President of Ukraine Petro Poroshenko, the Ukrainian government and the Verkhovna Rada. The letter was signed by 35 MPs.

“The extreme right has established in Ukraine the order”: LGBT activists complain of disrupted in Chernivtsi festival

“Human rights are not protected, while the rights of all are not protected. Big changes often begin with a symbolic gesture. We urge the Ukrainian leaders and authorities to join its citizens on the Kievprayd June 17. Make a historic step and be in the front row at that time, the Ukrainians are going to meet a strong, diverse and equitable democracy in our European family,” the letter reads.

In the European Parliament urged the Ukrainian authorities to deal with unfinished work to ensure the fundamental rights of LGBT people, Recalling that Ukraine remains one of the last places in Europe where the laws do not protect non-traditional sexual orientation.