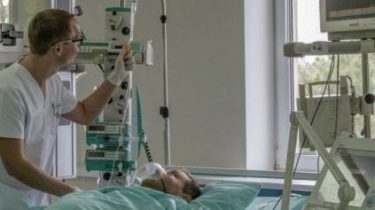 According to the General staff, the most affected by poisoning of the cadets were on leave.

In Kiev, a group of cadets of the Military Institute of telecommunications and Informatization for the unknown reasons has sharply deteriorated state of health.

This was reported in the General staff of the armed forces.

“11 June 2018 at about 08:30 in the sanitary Department of the Military Institute of telecommunications and Informatization, the name of the heroes of Kruty addressed the cadets with complaints of abdominal pain and nausea”, – stated in the message.

As it turned out, most of those who applied for help the day before were on leave outside the institution.

Published by the General staff ZSU / General Staff of the Armed Forces of Ukraine on 11 June 2018.

According to the General staff, all victims are provided qualified medical assistance, the cadets were placed in the infirmary.

In turn, the head of the Institute initiated an official investigation to clarify the causes of the accident, which involved leading experts of sanitary inspection, doctors National military medical clinical center “Main military clinical hospital”, the Central control VSP Armed forces of Ukraine.

Currently, none of the military educational institution of additional hospitalization is not needed, the speakers to the increase in the number of cases of sickness among the personnel of the Institute no.

Note that the number of victims of poisoning of cadets of the armed forces General staff is not reported.

We will remind, on may 22, in Kharkiv, about 11 o’clock in the morning while training pupils of school №3 abruptly became ill, they began to cough, some vertigo. From school to evacuate five hundred children. To doctors as a whole addressed four dozen students, four of them were in intensive care.

21 may in Mykolaiv 37 children were poisoned by an unknown substance during employment at one of the schools of the city. As a result of mass poisoning two children were in intensive care.

May 8, during a school ruler in Cherkasy also had a case of poisoning. Doctors noted that children and adults experience inhalation of toxic reaction. The poisoning occurred locally in the territory, which hosted the line, the victims outside the school.

On the same day in Novomoskovsk in a secondary school №6 on the line, timed to the Day of memory and reconciliation, became ill 19 students.

Press service of the General staff of the armed forces