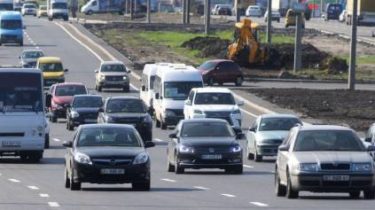 In Kiev there is still no monitoring of compliance with speed limits.

In Kiev, the streets 22 can allow the movement of the auto at the speed of 80 kilometers per hour.

“In a few dozen routes with good road surface, bump stops, overground and underground pedestrian crossings. All this allows you to move them quickly and safely. Therefore, for the comfort and convenience of drivers we have identified a list of roads, where in the period from April 1 to November 1, you can move with a speed of 80 km/h. During the winter period from-for difficult weather conditions on all roads of the capital will act only restriction is 50 km/h”, – stated in the message.

In particular, to increase the speed from April 1 to November 1 can at the following sites:
– Avenue of Victory (from the Povitroflotskyi overpass to
str Chernobyl);
– Great Ring road (from City street to the intersection
building of gas Pipeline and gas Pipeline from the street to Minsk
Avenue);
– St. Urban (Stetsenko to Gostomel highway) (provided
overhaul of the roadway);
– Ring road (from Avenue of Victory to street Trublaini);
– Obolonskiy prosp. (from Bogatyrskaya str to str Malinowski);
– Road R-69 (from Lake street to the border of Kyiv);
– prosp. Bandera (Obolonskiy prosp. Moskovsky bridge);
– Vatutina Ave. (from Moscow bridge to Kerch area);
– Naberezhno – Fishing (from bridge to Havana
Elektrikov str);
– Naddniprianske highway;
– Naberezhne highway (from Postal square to the Dnepr highway);
– Capital highway (up to AK. Zabolotny);
– Saperno-Slobodskaya (St. Grinchenko to the South of the bridge);
– prospect N. Position (from the South bridge to Kharkiv
area);
– bul. Friendship of Peoples (from Lybidska square to St. Nemanskoe);
– Brovarskoy Ave. (from Osvoboditeley Ave. to St. and Bratislava
from the street of Kyoto before the end of the village “Kiev”) (provided
conduct major repair of the roadway);
– bul. Perov (Voskresenskaya street to Alisher Navoi str);
– St. E. Teligi (from str to St. Cyril);
– prosp. Komarova ( from the street to St. L. Kurbas);
– L. Kurbas str. (prosp. Kosmonavta Komarova to the street gnat Yura)
– str;
– prospect of Unification (with the installation of distribution and transportation barriers).