Competitor “FEMEN” technology Bank. As the Network responded to a curious outcropping before Tymoshenko 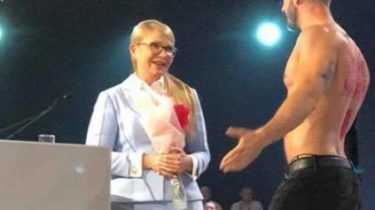 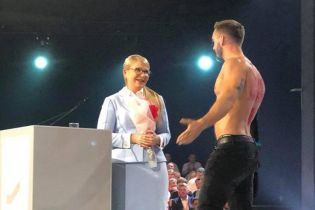 Competitor “FEMEN” technology Bank. As the Network responded to a curious outcropping before Tymoshenko

Users primarily reacted with irony to the incident.

On Friday, June 15, Yulia Tymoshenko holds a forum on “the New course of Ukraine”. During a speech on the stage came a young man who gave politics the flowers and lifted the t-shirt. The front he had drawn the logo of the forum, and on the back it says “New course of Ukraine,” with an arrow down.

Kolomoisky told about the sympathies Vakarchuk and Tymoshenko

Social media users immediately responded to the incident. Almost all reacted to the situation ironic, commenting on it in earnest. For example, someone noticed that on the back men the words “New course of Ukraine,” headed arrow down.

aaaaaaa! shows where a new course of Tymoshenko? Photo of the day)

That is all I saw “stripper” and floated the grandmother the transformer, but no one noticed the [email protected]?

BSA course. Julia, go ahead and close the… uh… door.

Others add to photos of various comic elements. In one of the photos a naked man took a watch and wrote a phrase that is supposedly said Tymoshenko: “the Kiev time 10:30”.

Also one of the users instead of the naked men put one hero of computer games – Kratos. He also has a red pattern on the body:

Excuse me for God’s sake pic.twitter.com/1MFKVL19Am

Drew the attention of the users that broadcast from the forum Tymoshenko looked not very many people. Someone pointed out that half of the viewers of broadcast journalists.

After such a powerful marketing to 338 hits during the broadcast? And 300 journalists), But about Striptease guy with flowers write) I Hope that the election result will be as the number of views.

Users also jokingly linked the situation with the “technology Bank” for the publicity of Yulia Tymoshenko. Someone saw a man “competition FEMEN”.

“I don’t think the guy with a naked torso is a technology Bank. But judging by Facebook, it really can all to kill,” says the lady.

I don’t think the guy with a naked torso is a technology Bank. But judging by fejsbuku, it really can all kill. Question: where are the guards looking?

The girls of FEMEN have a rival. Sent a bouquet with Bank

There were those who simply mocked the statements of Tymoshenko.

We will remind, the man, who bared a body in front of Yulia Tymoshenko during her speech at the forum said that dissatisfied with the actions of Tymoshenko as a politician.